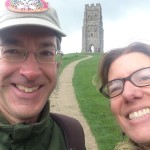 47 days:  ten planes, several trains, four countries, countless churches, two workshops, several sacred sites, one crop circle, and many blessed friends new and old,  we’ve just been on a whirlwind trip to Europe, commencing with the summer solstice and riding the wave into sun-drenched long days and warmish nights.
Bruce and I decided over a year ago to do a big trip in 2016 over New Zealand winter that did not involve family and which did involve being immersed in the northern hemisphere summer.   The aim was three-fold:  to study/learn a new skill and/or further our spiritual growth;  to experience new places; and to visit with friends.

So off to Europe we went where we had the good fortune to realize all three with ample abundance.  Our trip was so rich that each stopover deserves its own page of description but in the interest of time, I offer a summary of our pilgrimage to the other side of the world:

We spent three days in the quaint township of Glastonbury (population 10,000) at the Shekin Ashram which allowed us to recover from the long flight and shift into the current time zone.    A millennia of legends and myths surrounding King Arthur, Joseph of Arimathea and the Holy Grail have made current day Glastonbury a new-agey and spiritual gathering spot.  Walking down High Street, one encounters numerous crystal shops, spiritual book shops, organic cafes, and countless noticeboards with a wide range of alternative, holistic mind/body/spirit offerings.   The aptly named Oracle is an on-line repository for the daily events of the community.    We enjoyed exploring the township and its surrounds – the Glastonbury Tor (hill) where stands the remaining tower that once was St. Michaels Church;  the Chalice Well, a mineral-rich natural spring purporting to be where Joseph of Arimathea placed the chalice which caught the drops of Christ’s blood at the Crucifixion; and we attended a sound bath (form of meditation and relaxation facilitated by musical instruments such as singing bowls, gongs, and rattles) at the warm and inviting Goddess Temple.

Next, a short distance from Glastonbury, we spent a week at Earth Spirit Centre attending a week-long workshop facilitated by Jill Purce.  Bruce has studied with Jill for the past five years and has attended many of her workshops;  this was my second.    Titled “Healing Family & Ancestors”, her aim is to help unstick blocked energy that pervades families by understanding and working with the energy of an individual’s family and ancestors.   For instance, any tragedy or trauma that has struck a family (think untimely deaths, stillbirths, murders, suicides, affairs, incest, etc) somewhere down the generational line, and which was not recognized and remembered (since most of these types of things tend to get swept under the carpet or forgotten, almost every family I know has a ‘skeleton in the closet’) will then potentially have a negative impact on future generations.   I know it may sound a bit far-fetched to some of you, but I’ve witnessed it happen in my family (patterns of separation among siblings) and I’ve witnessed how this ‘blocked energy’ starts to flow after one does this work.      Jill utilizes her knowledge of Tibetan Buddhism and her workshop encompasses chanting and ceremony combined with family constellation (form of psychotherapy) work.   It’s a truly amazing and oracular process and I cannot do justice in explaining it properly – two good audio interviews can be heard here:  one on the family week workshop and one on the mandala week workshop.    My experience of the week touched me deeply and I will not say much more now.  Perhaps a separate blogpost can help put into words what was observed and felt.

Chartres (population 40,000) is the home of the majestic Chartres Cathedral which Bruce has been wanting to visit for ages.  He’s fascinated by its labyrinth which is built of stone on part of the nave in the cathedral.  Staying a five minute walk from the cathedral at the Hotel St-Yves, which once served as a prior for monks, we had three days to slowly take in energy of the cathedral and surrounding township.     Sadly, the labyrinth was covered over with plywood to protect it from the looming scaffolding on top as work was being undertaken to clean the stone and stained glass windows.

Chartres Cathedral is massive.  The first footprint of it dates from the 4th century.  Centuries of religious war and two fires saw destruction of the cathedrals – at least five incarnations of it occurred with the present day cathedral dating from 1194!

During the summer months, Chartres runs the Festival of Lights in which over thirty heritage buildings become illuminated at night in a techno-display of myriad colours and designs.  Dazzling!      We also did a walking tour of the town, climbed the cathedral north spire, toured the crypt, and spent a lot of time meditating in the various chapels of the cathedral.  I loved Chartres!

Prague (population 1.2 million) is the capital of the Czech Republic and was the largest city we visited.   Invited by our Kiwi friends Linda & Tim, we could hardly pass up the opportunity for a first-time visit to this eastern European city.  Bruce, nursing a strained back injury, spent most of his days resting at home while Linda took me touring around the city.  Highlights were Prague Castle, St. Vitus Cathedral, Charles Bridge, Wenceslas and Old Town Squares, and the modern day skytower and sculptures by David Cerny.  We mostly enjoyed eating and drinking our way around Prague.  The locally brewed beers are cheap and the food is delicious and inexpensive.  We had lots of laughs with Linda & Tim and can’t thank them enough for their hospitality!!!

I was last in Cavtat in 1997 just a few years after Croatia won independence from the former Yugoslavia.   Our San Francisco friends,  Jack and Nane, had been returning to Nane’s birthplace for years as most of Nane’s family still lived and currently live in the Konavale region of Croatia.  Now, almost twenty years later, Bruce and I had the opportunity to visit again.   Located just 15 miles south of Dubrovnik,  Cavtat is a seaside thriving tourist destination spot nestled along the blue azure waters of the Adriatic sea.   There is little to do here except relax, eat, swim, and have FUN!   Warm 33C/90F days allowed for daily swims and late night dinners.    We had a blessed time with Jack and daughter Ariana with lots of stimulating conversations and laughter (Sadly Nane was kept in San Francisco due to work commitments, so we are scheming to visit again in 2018!!!)

Back to the UK for our final weeks, we first stopped in the tiny, tiny village of Lacock (population 200), where we spent a whirlwind 48 hours with our San Francisco friends Sinead and Kevin.    Located in the Wiltshire countryside, this tiny village is comprised of quaint medieval buildings dating from the 15th to 18th centuries.   Our charming 15th century B&B,  Sign of the Angel, came complete with slanted walls, low ceilings, and hobbit-sized doors – people must have been much smaller back then!    Lacock is a popular movie set locale and we were excited to visit Lacock Abbey which was used as the backdrop for the famous Hogwarts School in the Harry Potter movies!   We also visited the nearby town of Bath and toured the historical Roman Baths dating over 2000 years old.    And we visited Bath Abbey and enjoyed the goings on of the town square.

Next, we spent a week at Harkwood College, an education centre located at a beautiful 1800’s manor house and grounds.    We were there for a ‘make your own singing bowl’ workshop which was taught by master craftsman Ton Akkermans and assisted by his wife Carolina Schomper.  We were a small group of ten, half of whom had worked with Ton and Carolina many times.  Apparently once you experience crafting your own instrument, you’ll want to keep coming back for more!   This was definitely our experience as Bruce and I thoroughly enjoyed learning the process of starting with a flat piece of metal and turning it into a beautiful sounding instrument.   But it was far more than just a physical learning process. It became a spiritual one as well.    Before we started, we talked about the history of Tibetan singing bowl making, how each bowl was crafted for a purpose to contain a certain knowledge.   Every bowl has an intention with which it was made and we were instructed to ponder what we’d like to intend for our bowls.   As we sat outside in the beauty of nature,  filing, hammering, firing, sanding, and polishing for four days,  I contemplated my bowl and infused it with my energy, breathing my essence into it.   Ton would check in with each of us and he and I had some amazing conversations as he would gaze into your eyes and ask ‘what is your wisdom?’     Needless-to-say, we love our bowls and hope to do another course with Ton and Carolina in the future!.

Our last week was spent visiting and staying with friends.   We spent a day with new friend Dawn who took us sightseeing.   Wiltshire County is famous for the crop circle phenomenon and we were eager to experience one for ourselves.    We had a great day with Dawn but saw no circles until a few days later when staying with friends Rosie and Roger.   A crop circle had been made nearby so Rosie, Bruce, and I had a day out visiting the crop circle as well as other local sites in the area.    Avebury, Sillbury Hill,  West Kennett Long Barrow, and Wayland’s Smithy Long Barrow are all Neolithic sites dating from over 4000 years ago and we enjoyed meandering through the large stone circle and ancient burial grounds.

We overnighted in Oxford to see our NZ friend Shona who’s living in Oxford for the summer months teaching English to foreign students.  We had a quick tour of the city and a delightful pub experience at the Turf Tavern.       Our last few days we spent at friend Hilary’s house in the eastern countryside near Bury St. Edmunds.   Hilary invited several folks that we know from the Jill Purce workshops and we had a wonderful two days with Hilary, Rosie, Amanda, Barbara, Stephie, and Hugh!!   A perfect conclusion to a perfect trip!

Wowza, needless-to-day, we had an enriching, abundant pilgrimage to Europe – so much sensory experience  –   the sights, the food, the friendships,and the learning, all made for a truly unforgettable trip.    THANK YOU, THANK YOU, THANK YOU!!!