A week into March and Mother Nature is right on schedule.  The weather pattern is changing signifying autumn is on its way.   We are at the tail end of summer and everyone I speak to wonders where the time has gone.   “It can’t be over,” “We’ve only just got started,” and “I’m not done yet” are phrases I hear and say.

But it has been a good summer dappled with many hot 30C degree days (mid 80’s), light breezes, and warm nights.  For me, summer is the time for two things:  massive gardening and holidaying!

For the ten years we’ve been in New Zealand, January marks the time for heading away on a two-week festival camping holiday to either Luminate or Kiwiburn.    This year we planned a double holiday with first spending four days in Nelson before heading north for Kiwiburn.

Nelson is one of the south island’s warmer regions which we’ve never had the opportunity to explore.   Now with friends Dawn & Hudson in residence there, we have reason to visit and a place to stay.  We spent a lovely few days with them, taking an afternoon to meander through the Brook Waimarama Sanctuary (where Hudson is the General Manager), and we spent a day at the Evolve Festival partaking in workshops and soaking up some groovy sounds from the outdoor stage.

We then ventured to the north island to Kiwiburn, which is New Zealand’s regional Burning Man event.  This year marked our ninth Kiwiburn and my fifth Burning Man.   Fourteen ‘burns’ in sixteen years – why do I keep going?   It has always been a huge endeavour to go to a Burn as we don’t just throw our camping gear in the van and head away – it is far more complex than that as the picture below shows what our van looked like for the journey!

All Burning Man festivals are co-created by the participants who attend and everyone is highly encouraged to ‘bring something, make something, do something’.    Our gift to Kiwiburn since 2007 is The Green Fairy, a black-light, UV, absinthe-bar/lounge.  We have a big carport which once erected and decorated is transformed into a fairy-like, glowy wonderland, bathed in chill electronic sounds, and Master Bruce is often seen behind the bar serving absinthe cocktails to those who have the patience to wait and engage in a conversation while the libations are shaken to perfection.

It takes us several weeks, and sometimes months, to prepare for our Kiwiburn pilgrimage.  This year we decided to change all the décor for the bar.    The Green Fairy theme, “Mandala”, signified our evolution over the years as we’ve grown on our spiritual path.   Bruce spent several months creating mandala paintings and a few friends also contributed artworks – all of which looked amazing under the UV-black light!  We even had a ‘tour book’ where one could read about each of the artworks on display!

Being immersed in the radically self-expressive, radically inclusive, participant created event often means that one will experience things both pleasant and unpleasant which translates into an amazing opportunity for personal growth.  It is one of the reasons I go – to see what will happen. The years Bruce and I spent on the organising committee and crew stretched us in ways we could not imagine, sometimes to the breaking point, and I’m grateful for the bits of wisdom that came from working through many difficult situations.

This year was new for us in that we actually had a Green Fairy ‘camp’.   Usually it’s just Bruce & me and one or two people who camp together and run The Green Fairy.    Our focal point has always been outwards into the festival and to the friends we see annually from around the country.   This year we had 17 of us comprised mainly of newbies and my focal point turned inwards, to my campmates.   Dubbed “HQ” (headquarters), I endeavoured to be a great Kiwiburn hostess, communicating and sharing the ethos that makes a Burn so unique and magical.   I had a lot of fun with campmates Lucy, Ian, Lizz, Evan, Brian, Simon, Waldi, Jess, Sam, Willow, Odin, Rhoda, Evan #2, Kristen, Steph, Chris, and Anita!

And we were an international crew with Rhoda from Hong Kong;  Simon from the UK;  Lizz, Evan, and Brian from the US;  and the rest of us live-in New Zealanders originally hailing from the US, UK, and South Africa along with a couple of true-blood kiwis too.

Every year is different and this year I noticed for myself that there weren’t the extreme highs or lows as in past events, but more of a ‘steady state’.   There were some uncomfortable moments but mostly it was fun and relaxing.    Some of the highlights for me were:   Ladies Night party hosted at The Green Fairy;   Prom Night roving dance party;  breast milk liquor shots; afternoon boogie at Cape Carnival’s Whine & Cheese party;  afternoon dips in the river;  going on the evening art wank tour to see all the Kiwiburn artworks;  hanging out in camp with my mates; getting everyone outfitted for the White Party; boogieing under the stars;  feasting on the roasted beef provided by the farmer; our spontaneous David Bowie tribute party; catching up with friends from all around the country; and winning a prize for cutting off a piece of Karl’s beard!   Good stuff!   You might glean from all I mentioned that the operative word here is FUN — one of my themes for 2016!

Alas, all good things must come to an end, and after eight nights, it was time to pack up and make the two-day trek home.   Collecting Nina from the kennel, we arrived home tired, yet content, and proceeded to slowly start the cleaning up and packing away process, catching up on sleep, and catching up on the responsibilities of life.

The grass and garden do not stop growing when we’re away and we arrived home to much that needed doing.     A call to the gardeners brought in the ladies who help me with weeding the floral gardens, a new man to help with landscaping and pruning, and woofer Forrest who cheerfully spent three 4-hour days mowing and weed-whipping the grounds.  Every day I’m outside for a few hours weeding somewhere.    The veggie garden is abundant with zucchini/courgettes, beans, kale, rhubarb, and potatoes;  the pumpkins and tomatoes are growing and ripening;  the fruit trees are laden and waiting for harvest.     Birdsong bounty surrounds us.     Viva la summer! 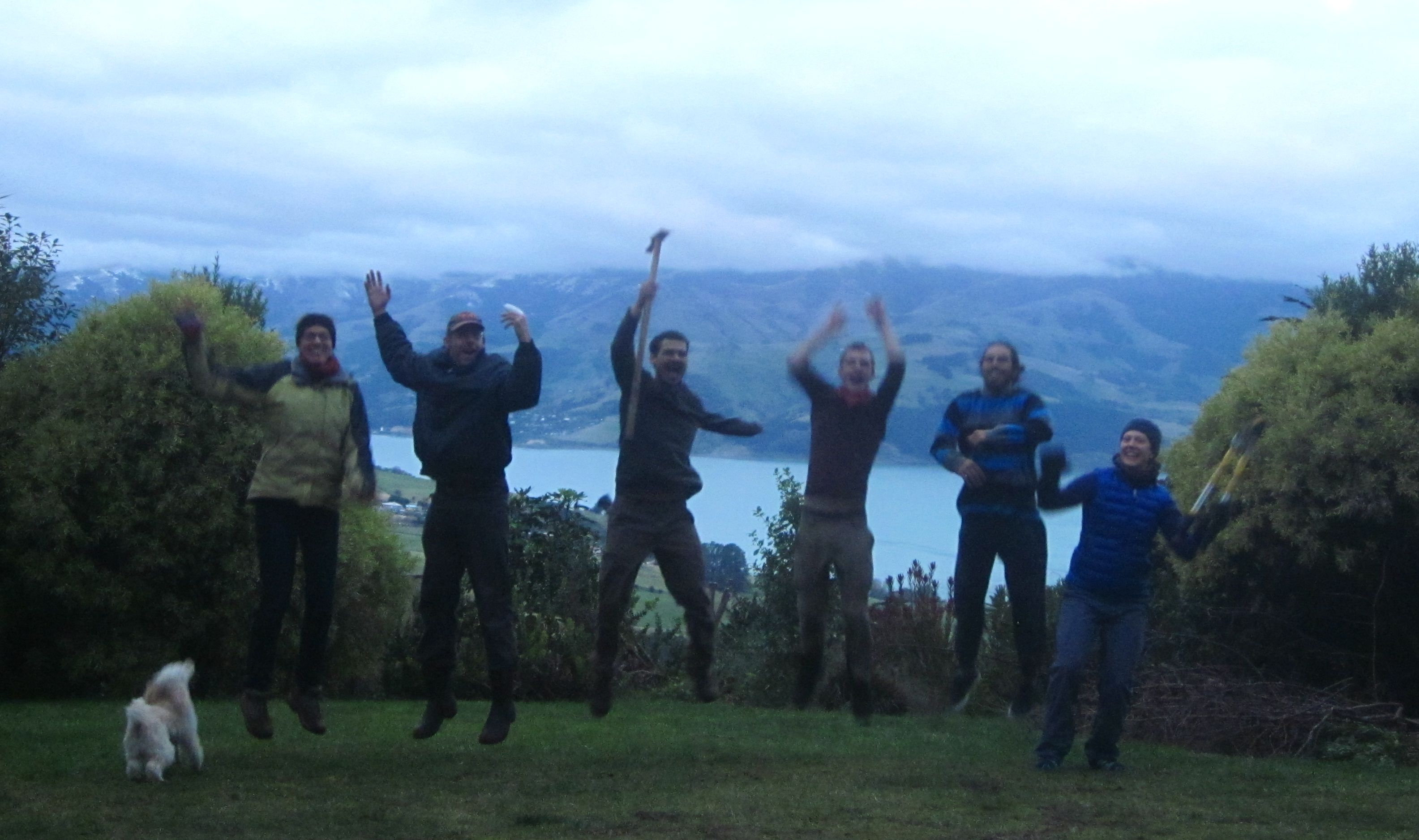 Weathering the Wainui Winter, May – August, 2015