Kiwiburn, Enlightenment, and The Temple of Kali/Hugo 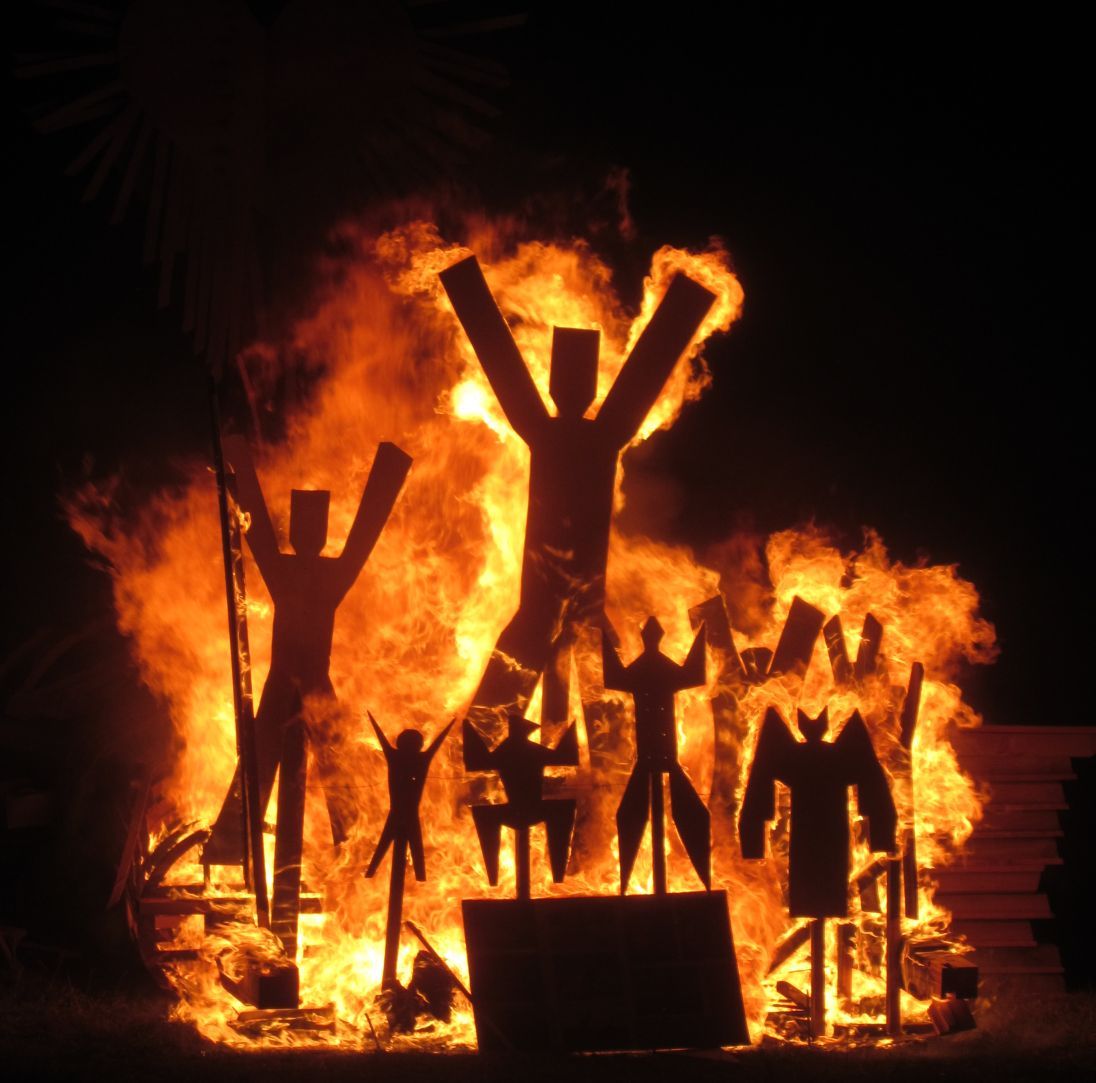 I’ve been back in New Zealand for as long as I was in the States last year for dad’s illness and subsequent passing: five months! I’ve done very little writing since returning despite the fact that life has marched on with interesting stories to share. But I haven’t had the inclination to pen a blogpost as a part of me has not wanted to access my well of emotions that I am still carrying and processing. There is still much grief along with wonderment at the journey I experienced with my family and father and I’ve needed time to just focus on the physical aspects of living and being rather than spend time with my feelings on a loftier plane.

However the desire for writing has slowly been returning. The turn of the seasons with the autumnal colours, shorter days, and colder weather is now bringing me inside more often and hence, there’s more time to ponder and reconnect with my emotional self. I also am involved with a very special project, called The Temple for Christchurch, which warrants sharing with the greater world beyond our region and shores, but before that story must come the story of Kiwiburn, Enlightenment, and The Temple of Kali/Hugo.

In recent posts, I wrote about rituals and pilgrimages and the importance of both for healing.

Kiwiburn celebrated it’s 10th anniversary and the theme, in hindsight, was appropriately named EnlighTENment. Many amazing synchronous things happened on the paddock and I felt that I and the festival elevated to a higher state of being.

We, as the festival organizers, had many challenges to overcome. The whole region was under a fire ban which meant our fire permits to burn the Man and Temple were going to be withheld unless we could provide appropriate fire remediation that the regional fire chief requested. Hippie Tim and I spent the better part of Monday through Friday phone calling, emailing, and meeting with a variety of folk to put the pieces of the puzzle together for the fire chief.

Meanwhile, the 10-person crew building the Man were working around the clock to get the Man ready for the festival. On site two weeks prior to the event, the build was behind schedule. The festival started and the Man was nowhere near finished.

And sadly, many of the crew found out a few days before the festival started, that a fellow young Kiwiburner, Jess, had passed away from a freak accident. Several of our senior managers left the site for a few days to attend her funeral.

Kali, as Bruce had named the Temple, was rearing her ugly head. (Kali is often referred to as the goddess of death and destruction and also creation. Often feared, some say what we are looking at when we see Kali are our own fears, our egoic fears, which, in order to be truly liberated and free, must be destroyed.) It was time to face her head on.

The Temple crew were busily building the Bruce-designed dodecahedron-shaped temple. Built in triangular pieces that were woven together with wire, each piece was fashioned onto the frame until the star-shaped structure took its form.

At night, the temple was illuminated by a trio of lights. It was beautiful.

We built three altars inside the temple: one to honor my dad Hugo; one to honor Jess, and one to allow people to leave offerings. I erected a picture of dad, brought some of his ashes and a few other items to place on the altar.

Also inside, we inserted a copper basin into the ground which sat below a copper rain chain cup descended from the ceiling. We expected rain at the event and were hoping to provide a water feature in the temple. However, with no rain in sight, the basin and cups became a vessel for candle-lit illumination. One evening Bruce and I and a few others were in the temple and were led by Stevie in a Sanskrit chant and song. As we sang, the flame in the copper basin sparked bigger and bigger until a vortex of flame emerged. For a moment we thought we were going to have to use a fire extinguisher to subdue the flame but it died down on its own. It was Kali telling us to face the fear. 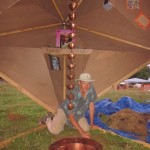 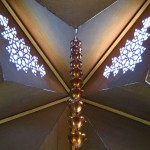 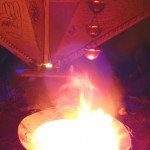 Another evening before bed, I stopped by the temple to pay respects to dad. A few French boys and a young girl were sitting inside and I joined quietly. The boys were chatting in French and one of them pointed to the picture of my dad and said something like ‘I think that guy’s dead’ and I said ‘That dead guy is my father.’ The girl sitting across from me looked over and said ‘Oh my gosh, you’re Kathy’ and she rushed over and gave me a big hug. She’d read one of my posts on the Kiwiburn forums and was hoping to meet me. We sat and chatted for a bit as one of her friends’ mothers was recently diagnosed with cancer. It was a touching and sweet moment.

The third day of the festival, Friday, arrived and we still weren’t sure whether we would have our fire permit to burn the Man on Saturday. And the Man wasn’t even yet in place. On Wednesday, most of the Man was finished and we had help by a hiab to turn him over so the other side could be completed. On Thursday, he was transported from the building site to the far paddock to be lifted into place. During the lift, one of the ropes snapped and he took a bit of a jolt as he fell to the ground. We also determined on Thursday afternoon that if we were going to have any hope of burning him, we had to move him back to the front paddock where better fire-fighting controls could be in place. On Friday afternoon, they moved him back and during the final round of lifting him to standing, he snapped and broke into many pieces. A collective gasp was emitted from the watching crowd. Kali – destruction.

Finally by 5 pm on Friday, we secured our fire permit for Saturday night’s Man burn. We had never not had a Man effigy and the fact that he lay broken on the ground was not going to deter our community. A handful of folks came forward and started to resurrect him. They lay him out and built him a fine looking heart which proudly protruded from his chest. And the Medic team even gave him an intravenous drip. He was now rather long than tall and would provide for an interesting burn. Kali – creation.

By the end of the week, both the entire interior and exterior were covered.

And a large wooden carving, in honor of the young deceased Jess, was chiseled out by participants throughout the week under the tutelage of a master carver. The finished piece was stunning and was to be offered to the Temple fire.

The weather for the Saturday night Man burn cooperated and the burn went off spectacularly. Mark Sitrling, founder of Kiwiburn, made a sculpture of ten years of “the Man” which was placed at the Man’s feet and lit up beautifully.

Unfortunately, towards the end of the burn, someone through a few fireworks into the fire (a severe no-no) which sent up sparks and ash which landed on some nearby tents. The volunteer fire fighters were not amused and we soon found out that our permit for the following nights’ Temple Burn was being cancelled. What a demoralizing blow to receive.

On Saturday morning, Hippie Tim promptly phoned the Fire Chief and had a bit of a chinwag with him. The Fire Chief was willing to give us the permit following some further guarantees which we swore we’d adhere to, one of which was we had to move the Temple over to the area where we burned the Man as the location was the safest spot on the paddock to do a burn.

In the afternoon’s twilight, the crew got ready to move the temple. I went in to have one last moment with dad. My friend Sam was there with his music box and he started playing and singing a beautiful melody. Kids were finishing their drawings and I knelt before the altar. The song pierced my heart and suddenly the well of tears inside me turned into a flood and I sobbed quietly while Sam sang. The culmination of the entire weeks’ tension, the ups and downs of each day, and the challenges of the unknown, finally came to a head and release was necessary.

When we were done, the crew moved the temple into place.

The inside was packed with kindling and several hours later, at dark, a group of us had the honor to ignite it. Again, it was a perfect night and the Temple burned beautifully. There were no more tears to shed – instead bliss and wonderment as I watched dad release into the upper realms and I gave thanks for having the opportunity to participate in this sacred and special ritual with my friends. I felt the tension ease and the joy rise.

What a week we had of dualities: ups and downs, traumas and joys, yin and yang. One reason I love Kiwiburn or any ‘burn’ event is because of the focus on the fire ritual – the burning of a structure that holds much meaning, both the Man and the Temple for different reasons – to put so much love and intention into building something, then sending it up in flames. It’s cleansing; it can be cathartic. It affords one an opportunity to let go (death) and move forward (rebirth).

Kali did her job this year. And I felt I went right into my Kali energy and walked through the obstacles with a bit of grace and dare I say, a sense of enlightenment.

Yeah, enlightenment. Gotta get me some more of that!