In my last post about the renovation, we ended with Pete & Kat planning to take a months’ break from Wainui to work on their own projects and for us to have a little bit of down time.   We did manage a tiny wee break when we went down to Petes’  place for his 50th fancy dress up party.  A good time was had by all!

But the reality was we didn’t get too much rest with being in the midst of two real estate transactions and the small matter of an earthquake.    And so, we plodded along and things have been getting done.

Ollie, being the trooper that he is, has continued to come to Wainui weekly and has been focusing on the outbuilding bathroom renovation.   We have come so far!     The framing, re-shifting of the window, plumbing (thanks to Pete), gibbing, and gib stopping has been completed.   We had fun shopping at the salvage yards for our toilet, shower door, shower fixtures, bench top, faucets, etc and saved heaps of money by doing so.

We’ve been talking and scheming for a while now about doing a tile mosaic in the shower of a mermaid/sea theme.   Ollie’s done heaps of sketches and after several weeks of pondering, the crew has selected the final sketch and Ollie has now drawn it on the shower gib.   We have purchased boxes of colourful tile and I’m excited to apprentice to Ollie for the actual mosac’ing!    Stay tuned on that front.

Pete came up for three weeks and Kat followed shortly behind.  We switched Petes focus from the heating installation project to the outbuilding project.  Pete spent a week+ getting all the plumbing done for the bathroom and then spent the rest of his time working with Kat to finish the moldings for the middle bedroom.  It is complete and looks marvelous!   Just about ready for guests!

Friend Al came and spent a few days with us post-party and we had him help us with fruit tree pruning and general plant transplanting.   We had a big rose bush, maple tree, quince tree, and two large hydrangeas that needed moving and Al was the guy to do it.  Also, old man pear got a BIG haircut.   Al was amazing, navigating the gnarly arms of old man pear, standing on its’ limbs wielding a chainsaw.   Seven hours later, he trimmed a good six to eight feet of height off the tree and it is looking stunning just a few weeks later in its glorious bloom! 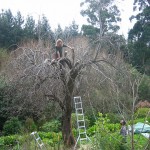 And somewhere in the midst of this group gathering we hosted two American woofers, Julie and Loren.   Julie’s a professional dog trainer and so we got some free lessons for Nina. Woot!   And when we weren’t practicing our lessons, I had the gals helping me in the garden, gathering seaweed and making compost!

The team has had the last two weeks off while Bruce & I shifted house and concluded our Clyde Road sale.     But we’re gearing to all convene next week and pick up where we left off!